Doug James and Bill Beall both spent a lot of time birding Lake Fayetteville in the
1950s, when it was brand new. 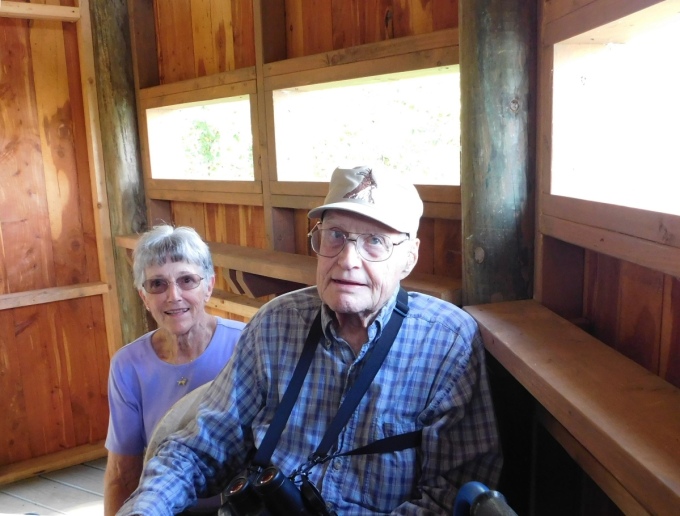 On September 8, 2016, Doug and his wife Elizabeth, plus Bill and his wife Toka, joined Mary Bess Mulhollan and a small group of folks at the Paige and Mary Bess Mulhollan Waterfowl Blind at Lake Fayetteville. To help a couple of folks with walking impairments, Botanical Garden of the Ozarks loaned us their golf cart and Joe Woolbright of Ozark Ecological Restoration, Inc, came with his pick up. We all gathered at the blind with designer Michael Cockram.

Right out the windows were migrating Double-crested Cormorants, easily viewed.

Along the walkway, a thick patch of Spotted Jewelweed, a native wildflower much used by
migrating Ruby-throated Hummingbirds.

The blind was built to fit into the wetlands landscape — seems to fit pretty well, judging from immaculate Black and yellow Argiope spider visible right out the window.